An Israeli military court on Friday temporarily suspended the detention of a hunger-striking Palestinian prisoner to allow him to receive medical care as his health rapidly deteriorates after nearly six months without food.

Lawyers for Khalil Awawdeh, however, said he would keep his 168-day fast going until he is granted a full release.

Israel says Awawdeh, 40, is a member of a terror group, an allegation he has denied through his lawyer, and no formal charges have ever been brought. The Palestinian Islamic Jihad terror group demanded his release as part of an Egyptian-brokered ceasefire ending three days of heavy fighting in the Gaza Strip earlier this month, but it did not identify him as a member.

Ahlam Haddad, Awawdeh’s lawyer, has said her client’s health has been deteriorating and he is seeking to be released.

An Israeli military court earlier this week rejected an appeal to free Awawdeh. Awawdeh has appealed to Israel’s top court, which is expected to deliberate on the matter on Sunday.

But on Friday, a military court said Awadeh’s detention would be frozen as he receives treatment at the Shamir Medical Center in central Israel, citing his failing health.

The court said his detention will resume once his condition is better and he can return to jail.

In response to freezing the detention on Friday, Awadeh’s lawyer was quoted by Palestinian media as saying his “hunger strike will not be suspended because he is asking for his release and not for a freeze of his detention.”

Awawdeh, a father of four, is one of several Palestinian prisoners who have gone on prolonged hunger strikes over the years to protest so-called administrative detention, which allows Israel to hold prisoners without charge practically indefinitely.

Israel says the policy helps keep dangerous terrorists off the streets and allows the government to hold suspects without divulging sensitive intelligence. Critics say the policy denies prisoners due process. The detentions must be renewed by a military court every six months, and prisoners can remain in jail for years under the mechanism. 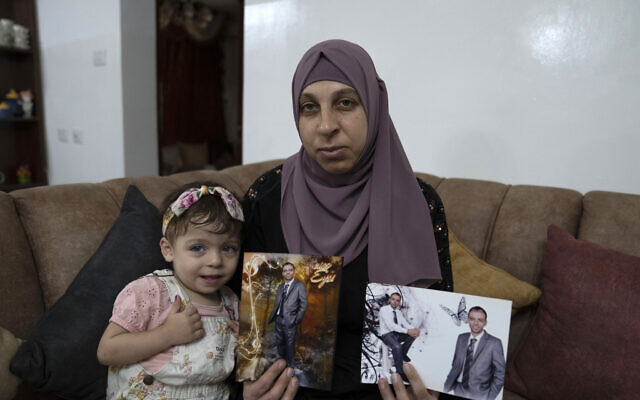 Dalal, the wife of Khalil Awawdeh, a Palestinian prisoner in Israel, displays his picture at the family house, in the West Bank town of Idna, west of Hebron, August 17, 2022. (AP Photo/Nasser Nasser)

Freezing his detention effectively means he is no longer guarded at the hospital by Israel Prison Service guards, and his family will be able to visit him more freely.

Haddad said her client has not eaten since March 4, except for a 10-day period in which he received vitamin injections. The Shin Bet security service has not commented on his case.

Islamic Jihad has also demanded the release of a second prisoner — Bassem Saadi, whose detention was extended Tuesday. The arrest earlier this month of Saadi, the Islamic Jihad’s leader in the West Bank, sparked an intense round of fighting in Gaza.

Israel is currently holding some 4,400 Palestinian prisoners, among them terrorists who have carried out deadly attacks as well as people arrested at protests or for throwing stones.

Around 670 Palestinians are currently being held in administrative detention, a number that jumped in March as Israel began near-nightly arrest raids in the West Bank following a spate of deadly terror attacks against Israelis.

Israel says it provides due process and largely imprisons those who threaten its security, though a small number are held for petty crimes.

Palestinians and human rights groups say the system is designed to quash opposition and maintain permanent control over millions of Palestinians while denying them basic rights.

Agencies and Times of Israel staff contributed to this report.

Supporting The Times of Israel isn’t a transaction for an online service, like subscribing to Netflix. The ToI Community is for people like you who care about a common good: ensuring that balanced, responsible coverage of Israel continues to be available to millions across the world, for free.

Sure, we’ll remove all ads from your page and you’ll unlock access to some excellent Community-only content. But your support gives you something more profound than that: the pride of joining something that really matters.

Join the Times of Israel Community

Already a member? Sign in to stop seeing this

We’re really pleased that you’ve read X Times of Israel articles in the past month.

That’s why we started the Times of Israel ten years ago – to provide discerning readers like you with must-read coverage of Israel and the Jewish world.

So now we have a request. Unlike other news outlets, we haven’t put up a paywall. But as the journalism we do is costly, we invite readers for whom The Times of Israel has become important to help support our work by joining The Times of Israel Community.

For as little as $6 a month you can help support our quality journalism while enjoying The Times of Israel AD-FREEas well as accessing exclusive content available only to Times of Israel Community members.

thank you,
David Horovitz, Founding Editor of The Times of Israel

Already a member? Sign in to stop seeing this