The consumption of berries can enhance “beneficial signaling in the brain.” Plant foods are our primary source of antioxidant and anti-inflammatory compounds, but some plant foods may be better than others. As I’ve explored before, a randomized, double-blind, placebo-controlled trial showed us that one cup of blueberries a day can improve cognition among older adults, and the same happens in children after just a single meal with blueberries, though two cups of berries may work better than one.

As I discuss in my video Benefits of Blueberries for Mood and Mobility, that single hit of berries may also improve mood. In a double-blind, placebo-controlled, crossover study, young subjects were asked a series of questions, such as Are you very slightly or not at all, a little, moderately, quite a bit, or extremely interested? Excited? Strong? Ashamed? And so on. As you can see in the graph below and at 0:55 in my video, before and after drinking the placebo, there was no significant change in young adult participants aged 18 through 21. But, two hours after consuming about two cups of blueberries, their positive mood scores improved significantly. They felt more enthusiastic, alert, inspired, and attentive. The same results were found in seven- to ten-year-old children. Benefits achieved not with some dangerous new mood-enhancing drug or Ritalin, but blueberries—and after just a single meal. 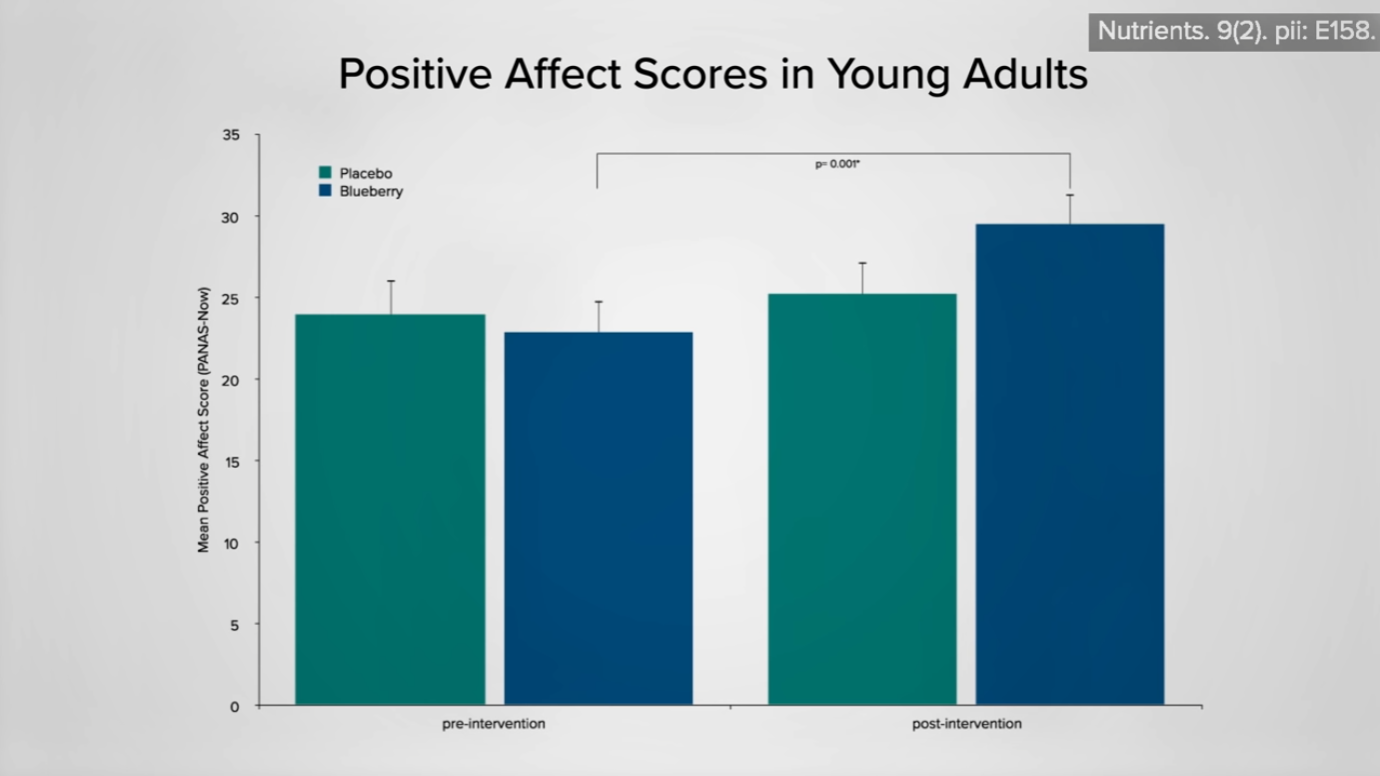 Now, blueberries can’t do everything. Although a cup of berries certainly appears to improve brain function, no improvements in walking (gait) or balance were observed. What if you tried two cups of blueberries a day?Might six weeks of two cups of frozen blueberries a day affect the functional mobility in adults over age 60? Study participants were randomized to prepackaged blueberries or prepackaged carrot juice as a control, and researchers measured tasks, including one where “two bright yellow ropes on the floor outlined the narrow path, and participants were instructed to walk within the roped path.” The blueberries beat out the carrot juice control, and significant improvements suggest “blueberry supplementation may provide an effective countermeasure to age-related declines in functional mobility…” In retrospect, the researchers thought perhaps the control should have been “a true placebo (e.g., cucumber powder) without antioxidant properties,” since the carrots themselves may have offered some benefit, too. Had they used a different control, the blueberry results may have been even more impressive. “Overall, this study demonstrates the need for greater exploration of blueberry supplementation as a nonpharmacologic countermeasure to the public health issue of age-related declines in functional mobility and independence.” Or, to use the punnier version, “dietary interventions with polyphenol-rich [phytonutrient-rich] foods, such as blueberries, present a potentially fruitful strategy for combating some of the deleterious effects of age-related neurodegeneration.” (Emphasis added.)

Isn’t science grand! I love that these studies were conducted.

The video I referred to is Flashback Friday: Benefits of Blueberries for the Brain.