Cabbage is put to the test in a randomized controlled trial.

My video Benefits of Cabbage Leaves for Relief of Engorged Breasts opens with a photo published in the British Medical Journal of a woman with a cabbage leaf taped onto her knee to help with her osteoarthritis. In response to that picture, doctors wrote in to the editor, asserting that cabbage leaves can help inflammation of any body part. “You may even find that there is a cache of cabbage in the fridge of your local maternity unit.” Why? Not only is cabbage “cheaper than any of the exciting gel filled pouches you can buy,” but knees are not the only “anatomical shapes” that “the leaves conform well to.”

Breast engorgement, when the breasts become overfilled with milk during breastfeeding and become hard, tight, and painful, can negatively impact both mother and infant alike. So, why not put cabbage leaves on them? A lactation consultant in a breastfeeding journal suggests wearing “cabbage leaves either inside a bra or as a compress covered by a cool towel” as it evidently works like a charm. And, once the swelling goes down, frequent breastfeeding should help the breasts from refilling too much.

Where did she even get this idea? Well, after her son got in a car accident, she wrapped his leg in cabbage…and the rest is history. The only adverse side effect identified was a complaint from the son who felt “like a vegetable.”

Based on the information she collected, she concluded that “cool green cabbage compresses have anti-inflammatory, anti-edema [anti-swelling] and anti-infectious properties,” but you don’t really know, until you put it to the test. Yes, but who’s going to do a randomized controlled study of cabbage leaves? Scientists, that’s who. Do cabbage leaves prevent breast engorgement? Let’s find out.

Researchers randomized 120 women to apply cabbage leaves to their breasts or not. Though the cabbage group tended to report less breast engorgement, the trend was not statistically significant. However, one of the big issues we care about is premature weaning, and the cabbage group did seem to be able to extend the time they were exclusively breastfeeding. So, the researchers said they “cannot rule out the possibility that cabbage leaves had a direct effect on breast engorgement, and that this may have contributed to the increased breastfeeding success in the experimental group. However, we consider that the positive effect was more likely to have been mediated by psychological mechanisms.” In other words, they were talking about the placebo effect. They did weed out some of the true believers “in the value of cabbage leaf application,” though, as some women refused to join the study out of fear they might end up in the control group and not be able to use them.

At 2:42 in my video and below, you can see the results of a similar study performed recently that found that while adding cabbage leaves to early breast care didn’t significantly reduce pain, it did seem to significantly reduce breast hardness. Since it probably can’t hurt, some women might just want to give it a try, but it would be nice to get some more concrete answers. For example, how about a treatment trial instead of just prevention? Researchers “suggest that women could be randomized to receive either hot or cold cabbage leaves,” and to control for the placebo effect, you could use placebo cabbage, like iceberg lettuce leaves. In fact, since both breasts are affected, “women could also be used as their own controls, using different treatments for engorgement on each breast,” like a cabbage leaf on one breast and turning over a new leaf on the other. 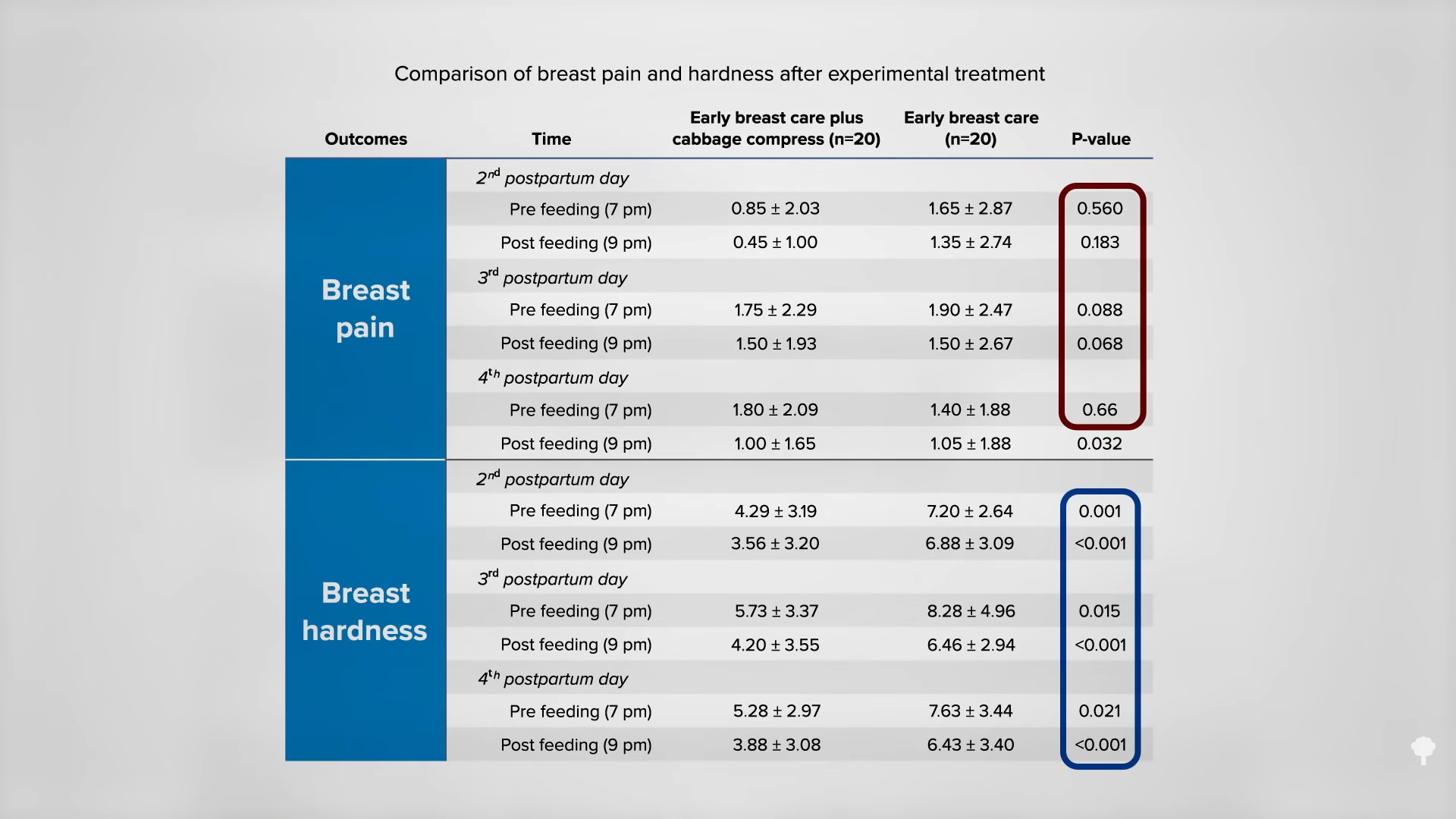 How about a comparison of chilled cabbage leaves versus chilled gel packs? Just cold alone “decreases blood flow…and might therefore, decrease engorgement of the breast.” On the other hand, “cabbage leaves may contain a chemical that the mother’s skin absorbs, thus reducing edema and increasing milk flow.” You don’t know, until you put it to the test.

“Thirty-four lactating women with breast engorgement used chilled cabbage leaves on one breast and chilled gel packs on the other for up to eight hours.” Their pain levels were established before and after treatment. The result? There was no difference. Both treatments appeared to work about just as well, with two thirds reporting relief within hours, either way—though, interestingly, the majority of mothers preferred the cabbage leaves.

“The similarity in the effect of both treatments may have been caused by the fact that both applied cold, although the effects of the cold in the cabbage leaves would have been transitory.” So, perhaps there’s something special in cabbage leaves after all? What we need is a comparison of chilled versus room-temperature cabbage, and we got just that. In another study, one breast got the chilled cabbage leaf and the other got a room-temperature cabbage leaf, and there was no difference between the two. They both seemed to work, suggesting that it’s not the cold itself that’s doing it, but we still don’t know what role the placebo effect is playing.

If you were going to design a study to determine if there was some special compound in cabbage that could decrease breast engorgement, what would you do? You could try the iceberg lettuce, but if women have heard about the cabbage effect, they might have an expectation bias in favor of the cabbage. Well, how about using a cabbage leaf extract? Then, you can finally do a double-blind experiment where women are asked to rub on a cream containing either a cabbage leaf extract or a placebo cream, and they don’t know which treatment they’re getting. Researchers even added rosewater to both creams “to camouflage any residual odor of cabbage in the experimental cream.” The result? There was no difference in relief. Now, “the decrease in discomfort produced by the cream…was not as strong as that produced by the real cabbage leaves in the previous studies.” The superiority of the whole leaves “might be explained by a failure of the extract to contain the potentially active chemical in the cabbage leaves,” or maybe the chemical broke down or wasn’t concentrated enough, or maybe there was just a powerful placebo effect of wearing cabbage leaves. The bottom line is that, “even though no active pharmacological substance in cabbage leaves has been identified in the literature, its convenient shape, low cost, wide availability and purported soothing effect make it a sought after treatment.”

And you thought all cabbage was good for was coleslaw!

Does it work for knee arthritis? Check out Benefits of Cabbage Leaves on the Knee for Osteoarthritis.

What else can cabbage do? See The Benefits of Kale and Cabbage for Cholesterol.