What, if any, are the caveats for tea tree oil use and tips on safe storage?

Is tea tree oil toxic? That’s the topic of my video, Is Tea Tree Oil Safe?. “Anecdotal evidence…suggests that the topical use of the oil is relatively safe, and that adverse events are minor, self-limiting and occasional.” Published data, however, add some caveats: It can be “toxic if ingested in higher doses and can also cause skin irritation at higher concentrations.”

Normally, tea tree oil reduces skin inflammation. Researchers injected histamine into the skin of 27 volunteers, the equivalent of getting bitten by a fire ant. The application of tea tree oil significantly decreased the associated swelling and discoloration—the big, red, swollen mark. As you can see in the graph below and at 0:45 in my video, the swelling and discoloration continues to get worse after application of a placebo oil, before finally beginning to calm down at around 40 minutes. If you apply half of a single drop of pure tea tree oil at 20 minutes, though, it stops the inflammation in its tracks and it immediately starts to get better. 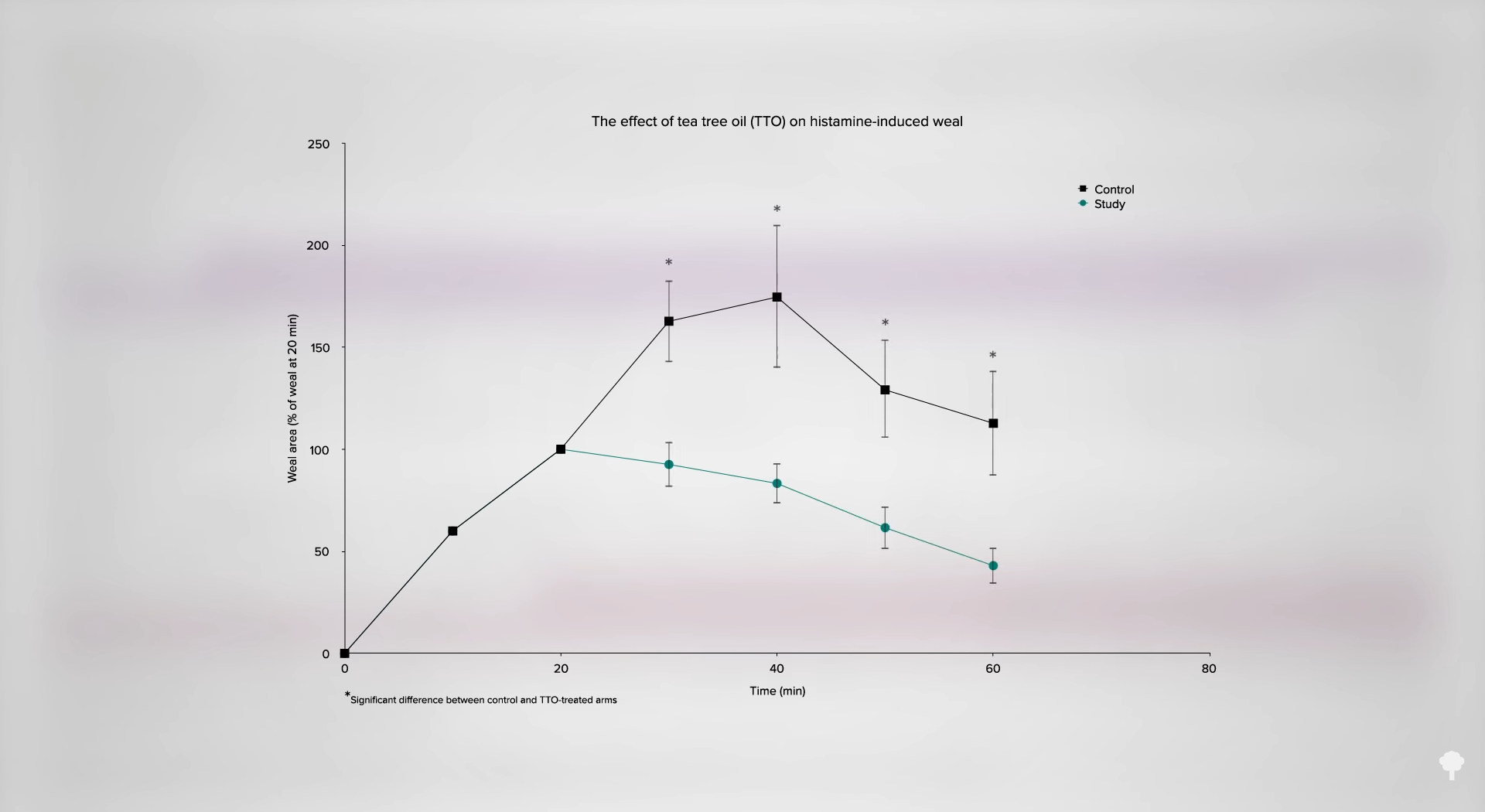 Some people are sensitive to tea tree oil, however, and it can trigger a rash, as you can see below and at 1:07 in my video. This is relatively rare, though, with only about 1 percent of older children or adults having such a reaction. None of the 40 younger children tested had a reaction, which is good, since tea tree oil may be found in about 5 percent of diaper wipes and lotions. 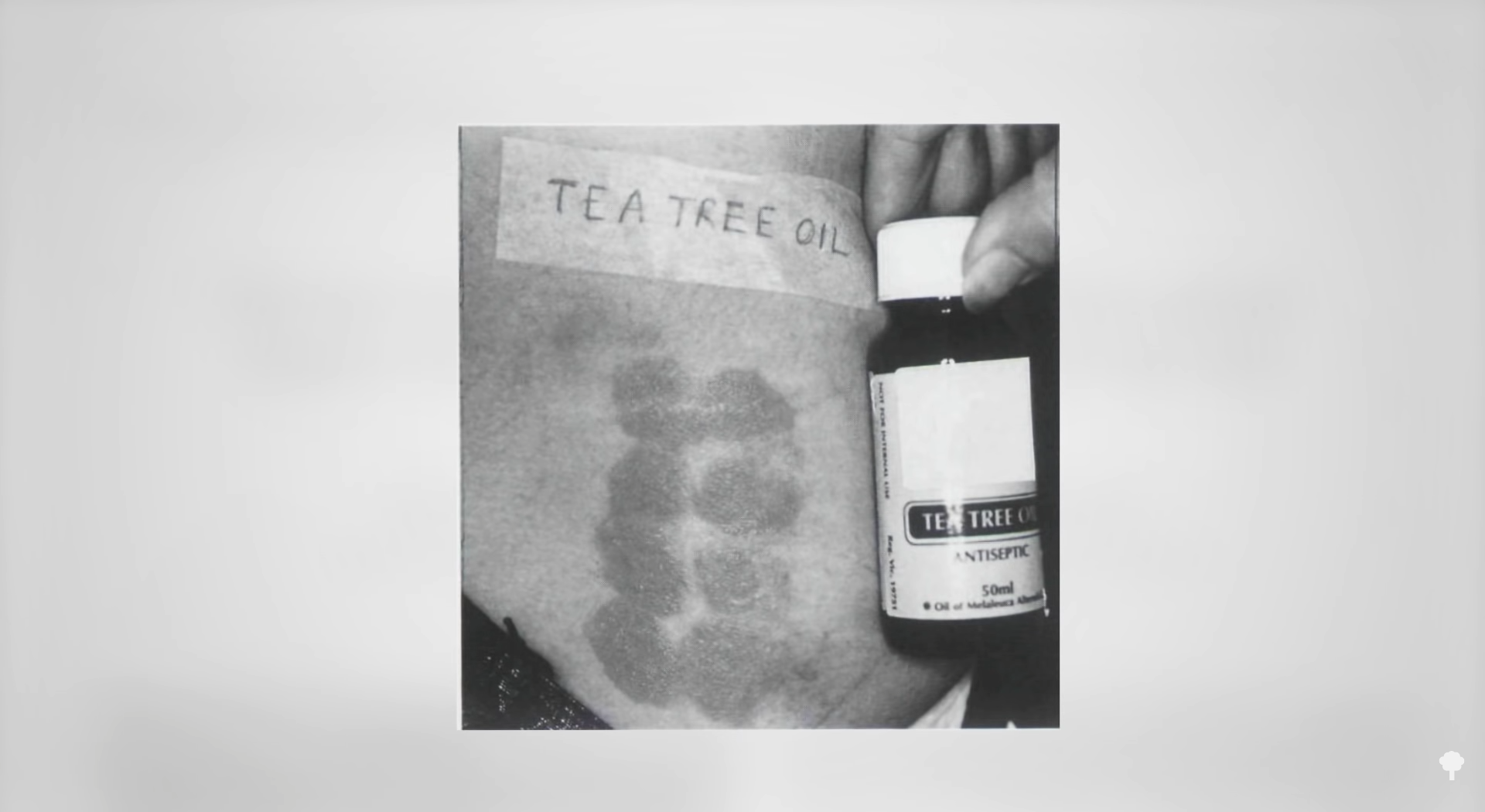 When they do occur, “most reactions are caused by the application of pure oil,” so there are recommendations to keep the concentration of tea tree oil products applied to the skin under 1 percent. “Moreover, manufacturers were advised to consider the use of antioxidants and/or specific packaging [such as dark bottles] to minimize exposure to light,” as aged oxidized oils are more likely to induce allergic reactions. Hundreds of different components have been identified in tea tree oil, but the composition changes when the oil is exposed to air, light, humidity, and higher temperatures. “With increasing age, the oil develops a green-brownish colour, the viscosity changes, and the smell becomes turpentine-like.” These are all bad signs.

Even “fresh” tea tree oil shouldn’t be ingested, though. Two hours before arriving at the pediatric critical care unit, a four-year-old’s “mother had given him approximately 2 teaspoons of 100% pure tea tree oil,” and, within 30 minutes, he had trouble walking and shortly thereafter fell into a coma. It was noted that the tea tree oil was in a bottle “without a childproof cap,” but it didn’t matter in this case because the cap wasn’t mother-proof either.

Similar cases have been reported at even less than two teaspoons, though the reported adult poisoning cases have tended to involve larger doses. Thankfully, no human deaths caused by tea tree oil have been reported, though it has been implicated in the deaths of pets when used inappropriately, such as trying to treat fleas. “Cats in particular are at risk because of their habit of licking their fur.”

In humans, though, it appears that tea tree oil can be used safely “by avoiding ingestion, applying only diluted oil topically and using oil that has been stored correctly.”

What about the reports of gynecomastia (abnormal breast development) among young boys exposed to tea tree oil? That’s the subject of my video Does Tea Tree Oil Have Hormonal Side Effects?.